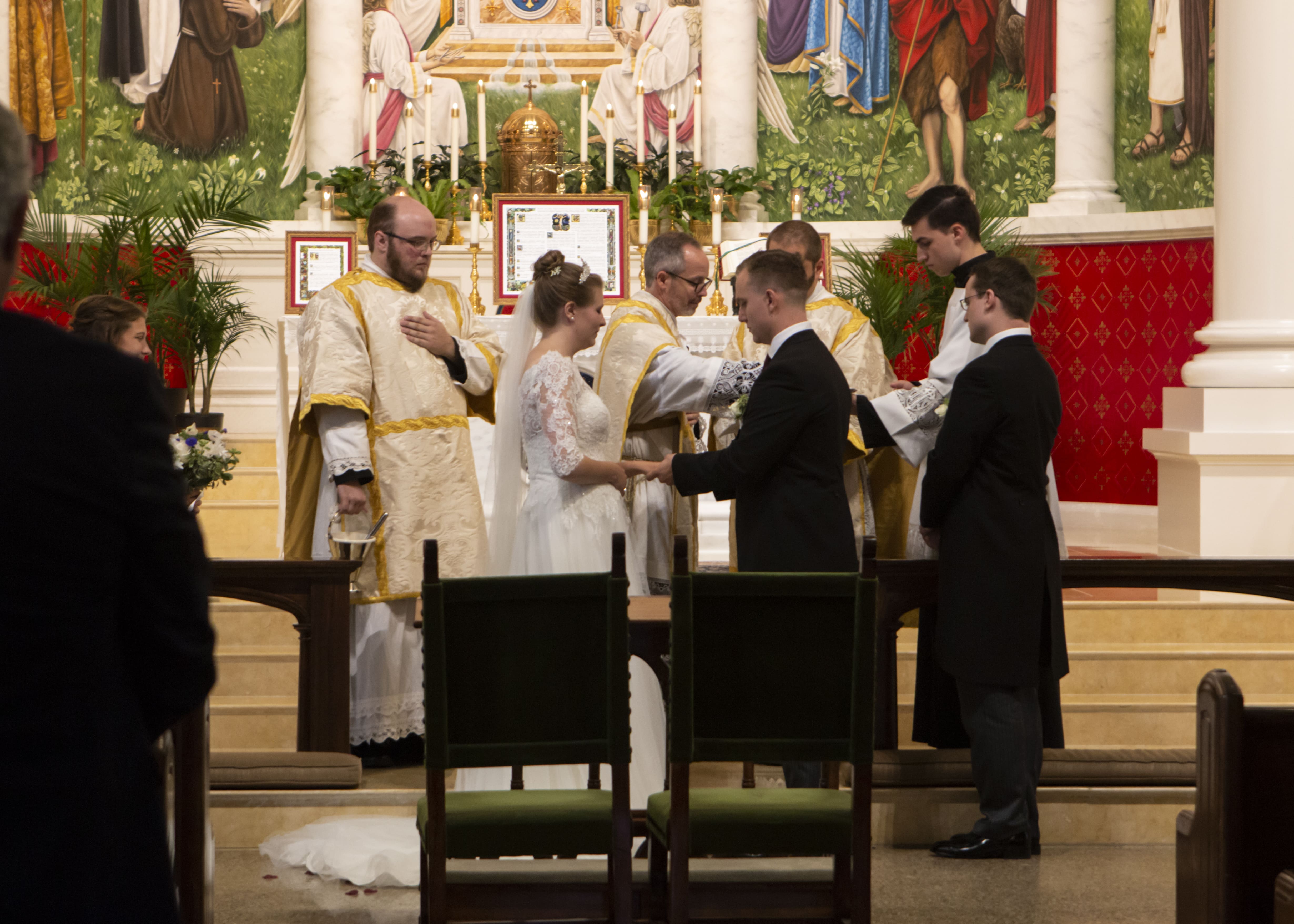 The Rite of Marriage is, “The form for the celebration of the Sacrament of Matrimony, as it stands in the ‘Rituale Romanum’”. 1

This is the essential part of getting married in the Catholic Church - a Mass is not required.

The only sacramentally essential element of the Rite of Marriage is the exchange of consent.

There are a couple of important historical notes to make about the Catholic Rite of Marriage before I include the text and rubrics of the rite.

The Rituale Romanum says, “Wherever other praiseworthy customs and ceremonies are used in the celebration of the sacrament of matrimony, it is fitting that they be retained.” 2

Perhaps because the marriage texts were not codified until fairly late, there is some variation when it comes to the specific words in the Rite of Marriage. 3 4

Matrimony has always been celebrated with greater leeway for adaptation than other Sacraments, largely on account of its pre-Christian history as a purely domestic and civil affair. For certain, Trent decreed that marriage is a Sacrament and that it must be celebrated in church, in the presence of a priest. But Trent also left room for local adaptation (“earnestly” so). The marriage formula contained in the Missale Romanum of 1570 is so bare that the austerity, itself, almost implies that it was meant to be the bare minimum to which local customs would be added. Notably, the Rituale Romanum was not published until 1614, nearly half a century after the Missale Romanum of the same council had been promulgated. During those intervening years, all that was provided was a Mass formulary in the 1570 missal. Even after the publication of the Rituale, “one must doubt that it was ever intended to be used as it stood.” Evidence shows, in fact, that local customs continued to be used in the period before the Rituale was published and even afterward, up until the late nineteenth century. 5

In the excerpt of the Rituale below, note that the marriage vows do not include the word, “obey.” This is not necessarily some subversive statement; it simply demonstrates that there can be a great deal of variety when implementing these texts and rubrics. The exchange of rings also only concerns the groom to the bride; this missal predates the fairly recent tradition of a double exchange of rings.

Below is the text for the Rite of Marriage, as found in the 1962 Rituale Romanum. This is to give you a starting point, an idea of what to expect. You can peruse plenty of Rituales online from earlier years and find slight variations in the text (like a Rituale from 1873 with English, Gallic, and German vows) 6. What remains the same is that there is an exchange of consent (and that is happens before Mass begins).

Part 1: The Exchange of Vows

The priest is vested in a surplice and white stole. If, however, the marriage ceremony is performed by the priest who is going to say the Nuptial Mass and this Mass follows immediately, the priest puts on all the vestments except the maniple, which should be placed on the altar, whence he takes it and puts it on after the marriage ceremony. To assist the priest there should be at least one acolyte, who wears a surplice and carries the book and a vessel with Holy Water. The priest interrogates the man and woman concerning their consent to marry.

First the priest asks the groom:

N., do you take N. here present, for your lawful wife according to the rite of our holy mother, the Church?

N., do you take N., here present, for your lawful husband according to the rite of our holy mother, the Church?

After he has received the consent of the parties, the priest tells them to join their right hands. and says:

Then he sprinkles them with holy water.

Part 2: Blessing and Exchange of Rings

Next the priest blesses the ring saying…

Bless O Lord, this ring, which we are blessing in Thy name, so that she who wears it, keeping faith with her husband in unbroken loyalty, may ever remain at peace with Thee, obedient to Thy will, and may live with him always in mutual love. Through Christ our Lord. R. Amen.

The priest then sprinkles the ring with holy water. The husband, taking the ring from the priest’s hand, places it upon the ring finger of his wife’s left hand, saying:

Take and wear this ring as a sign of our marriage vows. In the name of the Father, and of the Son, X and of the Holy Ghost. Amen. […]

After this, if the nuptial blessing is to be given, the Mass pro Sponso et Sponsa is celebrated, according to the rubrics of the Roman Missal.